Inside a hot-pink classroom glowing with sunlight, 20 teen girls sit at refurbished desktop computers, tapping at their keyboards with laser focus. They’re all coding — and it’s a rare scene, considering the gender gap in technology around the world. But there’s something additionally unexpected about this classroom: the teen girls inside live in Afghanistan, where cultural norms have historically blocked girls from school overall, let alone tech-based education.
SEE ALSO: 8 ways you can empower girls to learn coding

These girls are part of Girls Can Code, an intensive intro-to-coding program in Kabul developed by education-based nonprofit The Womanity Foundation. The global organization started the initiative to help galvanize and empower girls to pursue career opportunities in computer science.
While various independent programs do exist in Afghanistan to get girls invested in coding — similar to other efforts around the world — they have never been affiliated with the public school system. Girls Can Code, however, has the Ministry of Education’s stamp of approval. And that, the organization argues, makes a big difference in providing girls with stable opportunities.Ultimately, it further proves that girls can code — even in the most unexpected places.

“Nobody in any public school in Afghanistan is teaching any kid to code — not boys, not girls,” Elizabeth Rector, program leader for Girls Can Code, tells Mashable. “So this is brand-new as a school curriculum for public schools.”

And it goes beyond coding. The Girls Can Code program also works to connect the girls with mentors and internships, and further educational opportunities in computer science like certificate programs and college courses. Rector says this type of comprehensive support is done with a single hypothesis in mind — that it can be truly transformative.
“With this program, we’re trying to determine whether teaching coding skills at a young age can fundamentally change the trajectory of a young girl’s life,” she says.

Launched in April 2016 to coincide with the beginning of the Afghan school year, Girls Can Code has been implemented in two of Kabul’s biggest all girls’ schools — Spen Kalai School and Al-Fatah School. Forty girls between the ages of 16 and 18 are enrolled in the pilot program, which runs until the end of the school year in November. The girls in the program were chosen because of their high performance in both math and English language classes. Those skills, Rector says, are essential for success in tackling a challenging coding curriculum. The program runs in addition to the girls’ typical school day — two hours per day, five days per week. One of the participating schools runs its program before the regular school day begins, while the other school runs it after. By the end of the program, the girls will receive a staggering 300 hours of web development-based instruction.
“Think about your high school career,” Rector says. “Would you have gone to a coding class for two hours a day, five days a week for an entire school year? That’s a huge commitment. But the girls are really excited.”

The Womanity Foundation adapted the coding curriculum from a course at the American University of Afghanistan, usually taught to undergraduate students working toward bachelor degrees. It’s intense and challenging, and not only teaches the girls the basics of HTML and JavaScript, but also advancing them to MySQL and PHP — coding languages Rector says are unheard of in any high school, let alone in Afghanistan.
“We really want to get all 40 students across the line — and that’s not going to be easy to do,” she says.

With the Girls Can Code program, the Womanity Foundation hopes to create something that can be scaled and replicated across Afghanistan, as well as other regions where the organization already has a presence, such as India, Israel and Palestine.

“If you can prove you can do this effectively for teenage girls in Afghanistan, imagine what we can do in other developing areas,” Antonella Notari Vischer, director of the Womanity Foundation, tells Mashable. “It becomes a great model for women’s empowerment in education.”
In 2002, an estimated 900,000 boys attended school in Afghanistan. Women and girls, however, were almost completely excluded from schooling, a precedence that stemmed from Taliban rule of the region in the late ’90s and early 2000s. But thanks to educational development programs in the region post-Taliban rule, more than 8 million students are now enrolled in school in Afghanistan — and that includes more than 2.5 million girls.Even with strides toward broader access to education, schooling opportunities for girls in Afghanistan are still somewhat uncommon. An estimated 1.5 million school-age girls are still not enrolled in classes. According to government figures, there is only a 12 percent literacy rate among women in the region.While girls in major cities like Kabul may be encouraged to pursue educational opportunities, girls in more isolated regions of Afghanistan are often denied access to schooling in favor of providing for their families.

The Womanity Foundation has been working to improve the access and quality of girls’ education in the region for nearly a decade. Its work has largely focused on working with local teachers, activists and children to develop an understanding of the needs of girls in the region and the cultural context. That collaboration includes essential feedback on programming, which is what inspired the nonprofit to create a vocational program.

“What we began to hear at the beginning of last year was parents and students saying to us, ‘This is extraordinary. We really appreciate the support — but you need to help prepare us for the job market,'” Rector says. “That’s really how we got to Girls Can Code.”
But it was practical data that inspired the decision to design the vocational program around coding. Market research consulted by the organization indicated that in the next five to 10 years, when girls would be entering the job market, IT-related jobs would flourish.

“We saw the growth in technology jobs in Afghanistan while also hearing parents and students saying [they] need more vocational training,” Vischer says. “The intersection was obvious. One of the programs had to be something in or around technology.”

Not only is tech a growing field in the region and around the world, but it also provides girls with job flexibility — which is crucial, given Afghanistan’s cultural context. The organization estimates 85 percent of jobs in IT in Afghanistan are available to women, with the majority of those allowing the flexibility to work at home. That makes a difference when navigating career opportunities as an Afghan woman, since women often aren’t permitted to work in close quarters with men.

“In my opinion, home-based jobs are good if they allow you to connect with the outside world,” Vischer says. “And that’s a positive part about IT jobs. They still open a window to the outside world.”
Khadija, a 17-year-old student participating in the program, is aware of the limits of the job market for women in Afghanistan. But she hopes the Girls Can Code program will allow her to navigate current barriers successfully.
“The security is not good here [for a woman in the workplace],” Khadija tells Mashable via email. “If I know how to design and manage a project using technology, I can work safely from home, earn money and support my family.”

From a Western view, one might expect difficulty in implementing a program that serves to empower girls in Afghanistan. In fact, Womanity staff expected a massive challenge in getting the program off the ground. Vischer says the group was prepared for pushback from the Ministry of Education and parents — and even disinterest from the girls themselves.
But that pushback hasn’t happened. “There’s an image in the public that Afghanistan severely oppresses women and limits the ambitions women can have,” Vischer says. “It’s not true, and we’d like to deconstruct that. Girls are very ambitious and very eager to enter the job market. And, for the most part, their families are supportive of that. “There’s a bit of resistance, but there is also a lot of support as well,” she adds.

To the organization’s surprise, the Afghan Ministry of Education — which acts as a gatekeeper for public school instruction — immediately saw benefits to the program. Rector admits it may have helped that the Womanity Foundation offers schools infrastructure-related perks to support the program. Both of the schools participating in Girls Can Code received new tech from the organization to support the program at no cost, including refurbished computers. Nevertheless, the Ministry of Education approved the initiative after only three meetings with Womanity.Though ministry approval is essential, Rector says another key group had to invest in the project: parents. Though Afghan parents are often characterized as limiting their daughters’ education, Rector says many of the girls’ parents encouraged them to enroll in the first place. That shift — from suppressing education under Taliban rule a mere 15 years ago to championing schooling for girls — is largely due to collaboration between the Afghan government and organizations like Womanity, Rector says.

“There’s no way we could have gone in, even with the Ministry’s support, and introduced these programs without having a foundation of trust that Womanity has built over the last nine years in Afghanistan,” she says.
Surprisingly, the most challenging part of the program was finding a woman to teach the girls. Since education for girls has, historically, been rare in the region, it was difficult to find someone who fit the hefty instructor requirements.The organization wanted an experienced and determined local coding teacher who spoke English as a second language — and she needed to be a woman.

“The instructors had to be female, given the cultural realities,” Rector says. “Could you do it with a man? It’s possible — but there would be a lot more cultural and logistical hurdles to overcome.”
Local universities aided in the search, and eventually the organization found 23-year-old Ms. Zakia. “It is important for me to teach something that is so completely new and groundbreaking to the girls, and I find it most rewarding to observe how eagerly they listen, pay attention and ask their questions,” Zakia tells Mashable via email. “They express their happiness and gratitude in taking this class, and I am impressed at how it has boosted their sense of achievement, self-confidence and aspirations.”

And Zakia’s philosophy, coupled with the coding curriculum, is working. The girls are spirited and inspired, according to the Womanity Foundation, seeing the potential of coding as a career. In that boldly painted classroom filled with computers and unwavering encouragement, students like 16-year-old Hasena are carving out a path once unimaginable to girls in the region.

“Before this class, my favorite field was health and hygiene; I wanted to become a medical doctor,” Hasena tells Mashable.”But now, I have changed my mind. In my higher education, I want to improve the skills that I have learned in this class and join the computer science field.”

Editor’s note: The last names of the girls participating in the Girls Can Code program, and the first name of their teacher, have been omitted to protect their identities. 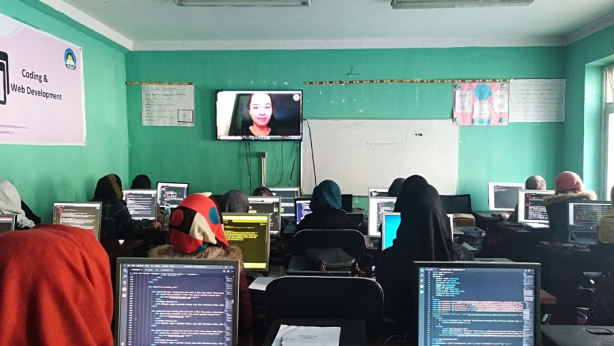