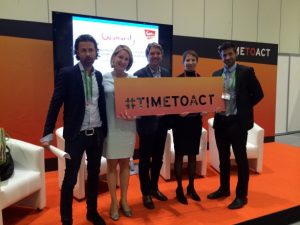 On the occasion of the presentation of the Womanity Award 2014, on May 20, The Womanity Foundation brought together its laureates and luminaries working to prevent violence against women to explore the challenges and opportunities in preventing gender-based violence. The conversation covered issues such as: the innovative Womanity Award and its vision for supporting and  scaling successful approaches; how the winners will collaborate across geographies and cultural boundaries to curb violence against women; successful strategies for preventing gender-based violence, involving boys and men; implementing prevention strategies in conflict and crisis areas.
Click here to watch the Womanity Award launch
Download the Womanity Award Booklet

The Womanity Award winners, Promundo and ABAAD, came together with four expert speakers for a panel discussion at the Global Summit to End Sexual Violence in Conflict in London, on June 10th, 2014. The summit was hosted by the UK Government Foreign and Commonwealth Office.
The talk-show style discussion explored the topic of transforming the norms of manhood and gender relations in the Middle East and North Africa region.

Several key issues regarding the various dimensions of violence in the Arab region were raised during the interactive discussion, notably:

The session ended with a Q&A session that raised many key questions and issues that Promundo and ABAAD plan to address with “Program H”.
The Womanity Foundation is now working with both partners to assess their needs, put in place a plan of action and implement “Program H” in Lebanon.
Download the Global Summit Panel Discussion Summary

Previous Story
“Be 100 Ragl” (Worth 100 Men) – Arabic radio fiction series sparks discussions on women’s role in society
Next Story
Aya Mostafa, a woman “worth 100 men” , with a story to tell.