Be 100 Ragl II. The fiction that empowers women

Building on the popularity of the  “Be 100 Ragl I” radio series of 2015 — a soap-opera chronicling the adventures of Noha, an intrepid radio journalist fighting for social justice — the Womanity Foundation is pleased to announce the launch of a new, engaging and innovative animated cartoon series “Be 100 Ragl II.”
The captivating Arabic series highlights the challenges and issues women in the Arab World face while showcasing their central roles in society. The series was developed for the Womanity Foundation by Lapis Communications, and will be broadcast on July 3, 2016  on Shahid.Net, the largest free video-on-demand service in the Middle East and North Africa. Shahid.Net has one of the largest online viewer bases in the Middle East, with an average of 13.3 million monthly visitors. The series will similarly air on Kharabeesh, the most popular Arabic network on YouTube, which boasts more than 700,000 subscribers from the 22 countries of the Arab World from August 2016.
“Be 100 Ragl II” was developed based on the issues that affect women in the larger Arab World, and aims to seed meaningful dialogue and debate around these topics while challenging audiences to both think and act.
The series follows its principal character from season one, Noha,  voiced by the actress and producer Saba Mubarak, as she moves to Dubai to pursue her career as a radio  journalist and presenter. In Dubai, Noha, along with her colleagues, produce and present a radio program that chronicles the real stories of Arab women, while proposing creative ways to further empower them. Along with Saba Mubarak, Womanity worked with YouTube sensation Alaa Wardi to develop a theme song and music video as a regional anthem for women’s empowerment.
The plot for the series was crowd-sourced from the real-life experiences of Be 100 Ragl’s Facebook fans. In ten short episodes, new perspectives are offered on a wide range of social issues, including women’s social, educational and economic empowerment, domestic violence and sexual harassment, early marriage, and political participation. The series will be hosted on Shahid.Net, and can be followed on the “Be 100 Ragl” Facebook Page, and the dedicated b100ragl.com website.
In addition to online conversations, the Womanity Foundation is partnering with a range of grassroots organizations to host a “Be 100 Ragl Tour.” The tour will be centered on a series of events across the Middle East and North Africa held throughout 2016. Through a mix of online and community-based debate, Womanity is looking to challenge audiences to develop creative solutions to the issues that plague their societies.
“Our ambition is to open up a space for debate on some of the problems faced by women, and at the same time, to focus on their abilities to find solutions and make valuable contributions to their communities,” Antonella Notari Vischer, Executive Director of the Womanity Foundation declared. “Fiction is an engaging, non-confrontational way to set the scene for constructive conversations, even on the most serious issues. . We hope that ‘Be 100 Ragl II’  can help enlighten men and women on how to build a more just and equal society together.”
Follow us on our social media to take part in the conversation!
Facebook
Twitter and #b100ragl
For more information please  contact us at contact@b100ragl.com
ABOUT US
Womanity is a private philanthropic Foundation established in 2005 in Switzerland and also registered in, the United Kingdom and the USA. It works around the world to empower girls and women to shape their future and accelerate progress in their communities. In 2009, Womanity in collaboration with the NISAA Broadcasting Company established NISAA FM, the first commercial radio station in the Middle East for and by women, and recently set up  Nisaa Network a groundbreaking multi-media platform promoting content around women’s role in society.
Womanity.org /// Twitter /// Facebook /// Linkedin

Tags: arab women in society Be 100 Ragl
Previous Story
Feminism in India: simple tech gives women a voice
Next Story
How fiction and ‘edutainment’ can be used to empower women

How to design an animated fiction series “We brought together... 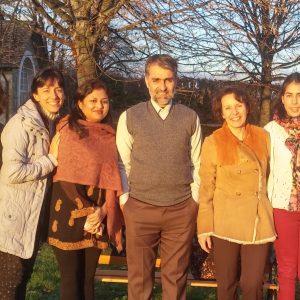