“Women are changing the conversation about harassment, and this is a big deal”

“I was 11 and a guy riding a bicycle came by and squeezed my breast. A woman on the street blamed me for wearing that blouse.” This was just one of many thousands of similarly disturbing social media posts during Mexico’s biggest ever feminist protests earlier this year. On 24 April, Mexico City’s streets were packed with Primavera Violeta or Purple Spring as they named the women’s uprising. Social media were equally filled with protesters. Girls and women of all ages came out to say they would no longer accept the intimidation and humiliation of being enslaved by oppressive stereotypes, stalked, abused and even killed because of their gender.
Seven women a day are killed in Mexico in anti-female attacks, according to the National Citizens Femicide Observatory. Last June, Amnesty reported on the disturbing cases of Mexican women being brutally tortured and raped by police. For generations, women have endured violence from all quarters because of Mexico’s macho culture.
The new technological possibilities to trace personal information and enable anonymous abuse add further threats to women’s safety. It leads to new strands of violence on- and offline as well as a toxic combination of the two. Testimonies of women like *Berenice and *Luisa (*not their real names), interviewed in Gender IT’s 2015 Mexico Analytical Report, are upsetting examples. Luisa was threatened on social media with punitive rape, raping of her adoptive daughter and having her house burnt down, simply because of her lesbian activism. Berenice, a teacher, discovered that pornographic material using her image was being created and distributed online, along with her personal details. She was abused in the street by men who recognised her.

Women who suffer on-line abuse are regularly advised to log off social media and the internet – essentially, the world – in order to protect themselves.

Perhaps shutting themselves away from their computers would stop the cyber-attacks; the ridiculing and shaming in public forums; the streams of abuse on Twitter; or even protect them from being physically attacked as a consequence of online exposure.
But women don’t want to withdraw from the public sphere – real or virtual – to stay safe.

With a world-wide gap of 200 million fewer female new tech users than men – and an even larger gap between male and female developers – we can’t afford that women forgo their cyber-presence and -agency. On the contrary, we need them to boost their virtual interactions and partake more decisively in the important exchanges, collaborations and transactions that happen via new information and communication technologies, and which offer valuable opportunities for career advancements, political activism, social influence, personal and communal empowerment.

A month after the April protests, the Mexican women’s rights organisation  and partner media company La Sandia Digital picked up the USD 300,000 Womanity Award by the Womanity Foundation, to work on the replication of a vital initiative called Take Back the Tech! (TBTT!) which was developed by the South African Association for Progressive Communications (APC).
Over the past three years, Luchadoras has hosted weekly online TV shows with hundreds of women activists, artists, human rights’ defenders and researchers, voicing their constructive ideas and pressing demands for equal rights and social justice. Recently, the Luchadoras team has seen a big rise in the number of women complaining about cyber-violence.

Consequently, it has increasingly taken to training women to be safely active on-line, providing them with crucial information and guidance. Luchadoras is driving a cultural shift from women’s virtual absence or passive presence to women’s engagement as strong, influential tech creators, able to occupy significant cyber-space and to equalize it.
APC’s vast knowledge of similar work with TBTT! in other over 35 countries promises a boundary-breaking collaboration.

“Women are changing the conversation about harassment, and this is a big deal,” says Lulù Barrera, director of Luchadoras. “Abuse is normalized in this culture. But speaking out against it so profusely through the protest marches and social media has created safe spaces for more women to recognize abuse and sexism for what it is, and to unite against it. This is happening now because of the movement that emerged from social networks.” Cultural transformation is a long-term process; Barrera is aware of this. But the way social networks have accelerated change in the last few months in Mexico with respect to violence against women is unheard of, she maintains. “Compared to last year – or even a few months ago – there is a much keener awareness of gender-based violence and inequality, and this has been achieved by women’s voices, often enabled by technology.”

The tide of Mexican women on the move is rising, in the real and virtual spheres, and so is their call for peace, security and equality. Many of them are learning how to build a safe cyber-presence for their voices to be heard and mobilize a yet wider following. Watch them take back the tech space and courageously open its to those who have long been fearful and silent!
Antonella Notari Vischer is executive director at The Womanity Foundation.
The original post was published on Thomson Reuters Foundation News Blog on September 9th 2016 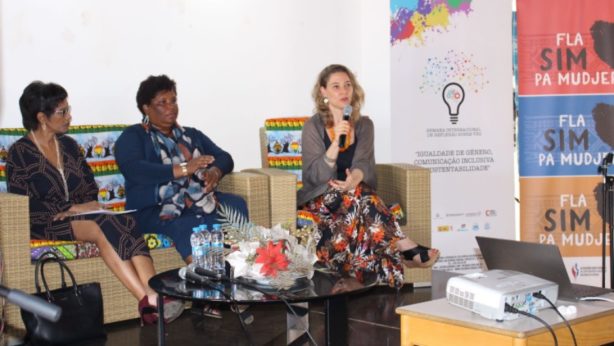